Control IoT and KNX in just one App with »Smart Screens« 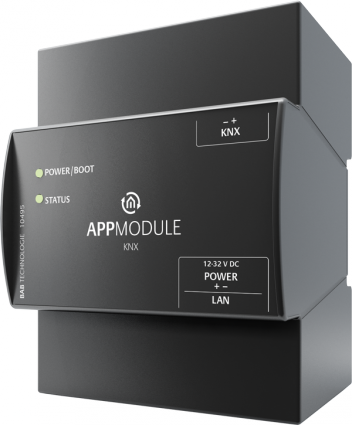 IoT Gateway, KNX IP Router, visualisation server. With the APPMODULE you can easily connect the whole IoT world with KNX and EnOcean.

Come Together. With the APPMODULE you can easily connect the whole world of IoT with KNX and EnOcean. Whether Amazon® Alexa, SONOS®, Philips® hue, Netatmo®, IFTTT, or DoorBird®: Install the appropriate smart home app on the APPMODULE and get started. It’s as simple as that. Once integrated, you control IoT devices with any KNX or EnOcean components – and vice versa, of course. For example, start your favourite songs with a wall switch, or control your KNX lighting with Amazon® Alexa. The constantly growing portfolio in the BAB APP MARKET offers smart home apps for the integration of IoT devices and services as well as functional extensions such as intelligent presence simulation. With the new “Smart Screens” you can even control any IoT, KNX and EnOcean device with your smartphone in just one interface. The direct KNX connection, the integrated KNX router functionality and the convenient KNX project import complete the scope of the APPMODULE.

COME TOGETHER – ALL UNDER ONE ROOF

Whether TV, multi-room system or LED lights – more and more everyday objects are becoming »smart«. However, these systems are often stand-alone solutions. The APPMODULE brings them all under one roof, connecting them with KNX, EnOcean and each other.

Integrate Amazon’s Alexa voice control system into your Smart Home with KNX, EnOcean and IP. In combination with Alexa Skill “BAB TECHNOLOGIE” you can effortlessly connect your APPMODULE with Alexa. Connect the whole world of IoT and building automation with Amazon’s voice control. The “BAB Alexa” app for the APPMODULE is now pre-installed free of charge. 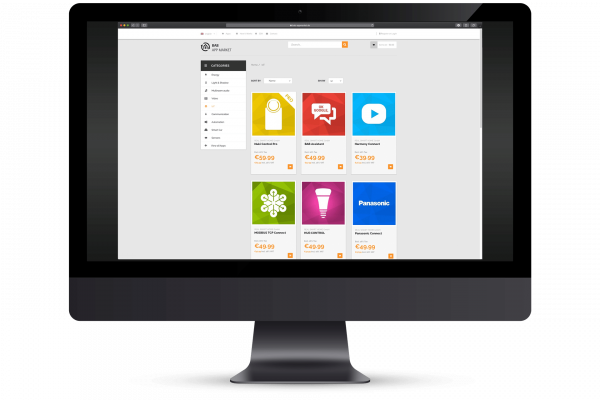 AS CUSTOMIZABLE AS YOUR SMARTHOME.
A smart home is individual and changes over time. With the APPMODULE you can extend and change the functionality according to your needs. You decide which functions it should offer. At any time. This is how today’s intelligent home remains tomorrow’s home.

FULL INTEGRATION. FULL CONTROL.
With the help of Smart Home Apps, you can integrate numerous IoT devices and services into building automation based on KNX and EnOcean. Choose from a wide range of products in the BAB APP MARKET and easily integrate multimedia products, for example: Simply assign an address to the desired function and you’re done. The integrated components can be controlled either via push-button sensors, an existing building visualisation or the »Smart Screens« visualisation provided automatically by APPMODULE. Everything in one interface – eliminating the hassle of switching between individual apps.

EXTENSIVE APP-PORTFOLIO.
Whether it’s an IoT device or an intelligent function extension, the BAB APP MARKET offers a growing selection of smart home apps for the intelligent home. Simply load, install and start right away. Thanks to the available SDK, third-party manufacturers and developers offer their own apps for the APPMODULE in the BAB APP MARKET. More information can be found at www.bab-appmarket.de.

INTEROPERABLE APPS.
Smart Home Apps installed on the APPMODULE can exchange information among themselves via their assigned addresses. For example, start your SONOS® players with your favorite playlist via the presence detection feature of the FRITZ!Box®, or start a lighting scene with Philips hue® as soon as you turn on your TV. Use the Amazon®  or Google® voice assistants to control any device you connect to the APPMODULE.

SIMPLE AND WEB-BASED CONFIGURATION.
Apps on the APPMODULE can be configured easily and platform-independent with a web browser.. All Smart Home Apps from the BAB APP MARKET offer a uniform configuration interface. You will find your way around immediately.

KNX. ENOCEAN. IP.
Whether new installation or retrofitting: Equipped with a KNX/TP or an EnOcean interface, or on IP basis, the APPMODULE fits in almost every installation. The App »KNXnetIP for EnOcean«, which is available for the EnOcean version, makes the APPMODULE a complete gateway between EnOcean and KNX.

KNX IP ROUTER INCLUDED.
Simply use the APPMODULE instead of a conventional KNX IP router. This eliminates the need for a separate device in the installation. It can also be used as an interface to the ETS. 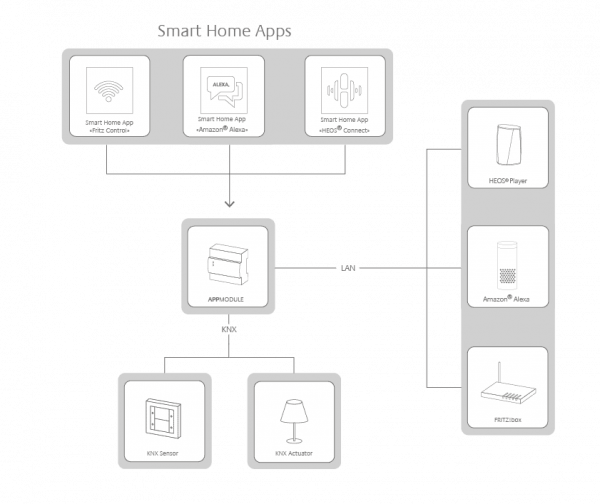 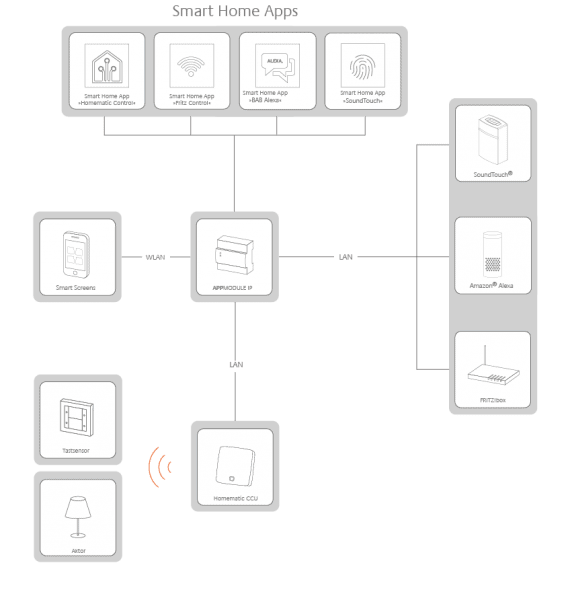 The APPMODULE IP works as a standalone device with the Smart Screens and triggers the linked functions of the respective Smart Home App. Alternatively it can communicate with the Homematic CCU. Linked Homematic devices can also be controlled – for example by voice input.

In this section you will find a lot of information about APPMODULE and our Smart Home Apps for KNX and EnOcean. Presented by Markus Büchelhofer and with friendly support of SIBLIK.

Thanks to installable Smart Home Apps, customers can expand KNX systems according to their requirements – just as one would expect from a smart phone or tablet.  The APPMODULE can also be used as a KNX IP router. In this video Bastian Niemann of clever4home explains how the APPMODULE works and talks about the numerous benefits of this unique product. 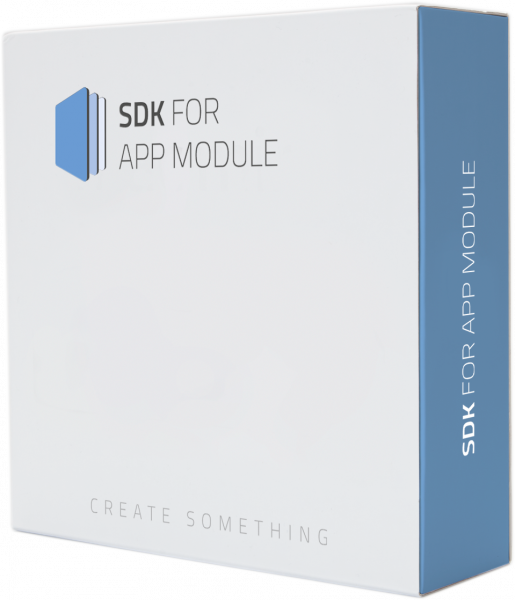 DEVELOPING FOR THE APPMODULE

The SDKMODULE opens up new possibilities for developers to help shape the world of the Smarthome and to make it even smarter through creative ideas. Together with the associated platform-independent SDK, new, unprecedented applications for the APPMODULE can be created for the KNX, EnOcean and IP worlds. In contrast to many other products in the field of building automation, the APPMODULE with its permanently expandable functionality offers highest flexibility through the app concept. It grows and changes with the requirements of the customer. Whether IoT integration or special automation solutions – the possibilities for developers and users are almost unlimited. Benefit from a convenient library for Java™ or Groovy applications and a modern distribution infrastructure that ensures transparent and lucrative monetization of your products – the BAB APP MARKET. The SDK simplifies your work with its provided methods and does not require in-depth KNX or EnOcean knowledge.

INFORMATION: Request the SDKMODULE including SDK directly from BAB TECHNOLOGIE.

Advantages of the SDK

SDK and SDKMODULE
The SDK provides all the necessary prerequisites for programming Smart Home Apps for the APPMODULE. The SDKMODULE (hardware) provides a connection to KNX or EnOcean and the IP world. This offers developers the opportunity to test their smart home apps in a realistic way.

Be creative – we take care of the rest
The methods integrated in the SDK allow you to communicate easily with KNX®, EnOcean® and network devices. Using JSON objects, you can define configuration interfaces from standard elements that the APPMODULE automatically transfers to a uniform design. Individual configuration elements are also possible thanks to polymer technology and JavaScript. Alternatively, you can develop the configuration interface entirely in AngularJS.

Integration of the APP MODULE
The APPMODULE can be integrated into almost any existing or planned building automation system. Regardless of the manufacturers and versions of the devices used – every KNX® or EnOcean® system is qualified. Of course, a purely IP-based control of the integrated devices is also possible.

Interoperability
Apps installed on the APPMODULE can interact with each other. For example, it is possible to control Denon HEOS® devices with Amazon® Alexa without having to install a skill from the manufacturer. Of course, this applies to all other installed IoT control apps.