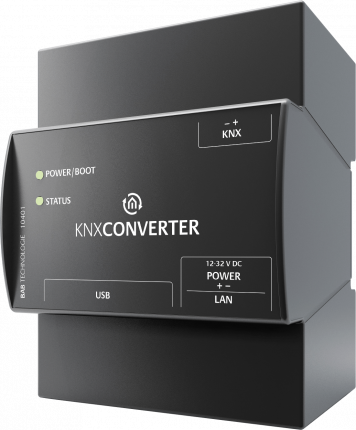 The KNXCONVERTER enables the connection of non-KNX systems as easy and fast as never before – without detailed knowledge of the KNX protocol.

The KNXCONVERTER converts KNX telegrams into ASCII code and vice versa. With its help you can integrate third-party applications very easily. The device sends the data via TCP, UDP (unicast or multicast) as well as HTTP. Thanks to the uncomplex structure of the KNXCONVERTER protocol (ASCII commands), integration is as simple as possible. A KNX/TP connection and the integrated KNXnet/IP server provide the connection to KNX. The number of data points is unlimited. The values of all group addresses are stored in an address status table, which can be read out by third-party applications. Different KNX worlds with the same group addresses can be distinguished by a system ID. The upload of ETS4 and ETS5 project data simplifies the creation of ASCII commands thanks to the use of identifiers and data types. In addition, the KNXCONVERTER can also be used as a programming interface for the ETS. You configure this device platform-independently via a web interface.

The KNXCONVERTER translates KNX telegrams into a simple ASCII protocol (KNXCONVERTER protocol) and vice versa. Easily integrate non-KNX systems without detailed knowledge of the KNX protocol. Use either TCP or UDP to configure individual solutions.

ASCII is one of the best known and most common encodings. It is used by the KNXCONVERTER protocol to simplify the control of KNX systems. Instead of having to implement the complete KNX protocol, ETS4 and ETS5 project export on the application side simply work with the corresponding identifiers. The integrated address status table enables third party applications to get an immediate overview of the status of the KNX system at startup.

Use the KNXCONVERTER in simple installations or in large projects. Due to the unlimited number of data points, this module, which is only four division units in size, meets almost all requirements. Thanks to the integrated KNXnet/IP server, the KNXCONVERTER can be placed not only directly on the KNX line (KNX/TP interface) but also on the TCP/IP-based main or area line.

ADDED VALUES FOR YOUR CUSTOMERS.

With the help of the KNXCONVERTER, which can also be used as an IP router and programming interface for the ETS, the advantages of different systems can be easily combined. In this way, you create new added value for your customers while simultaneously optimizing costs. 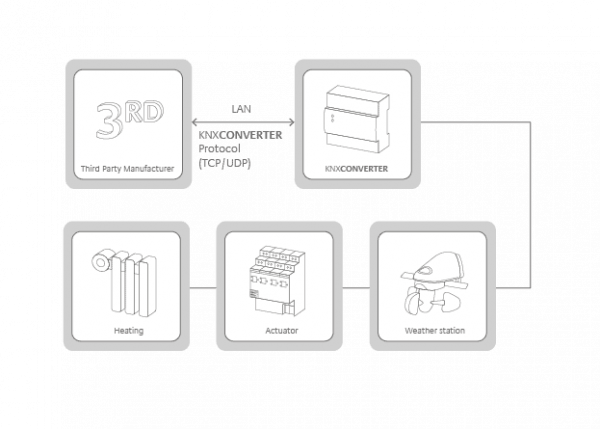 In larger installations, the KNXCONVERTER replaces an IP router with the integrated KNXnet/IP server. With the help of the KNXCONVERTER protocol, third-party applications are connected bidirectionally to the complete installation. In this way, the advantages of both worlds are ideally combined with minimal additional effort.