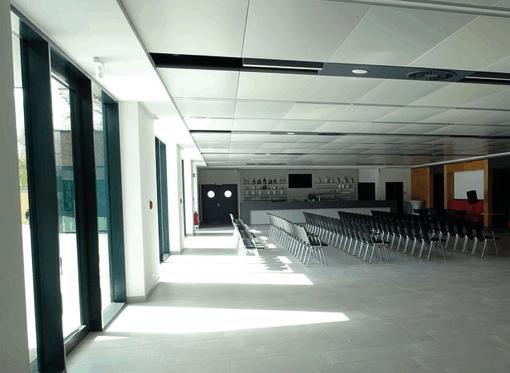 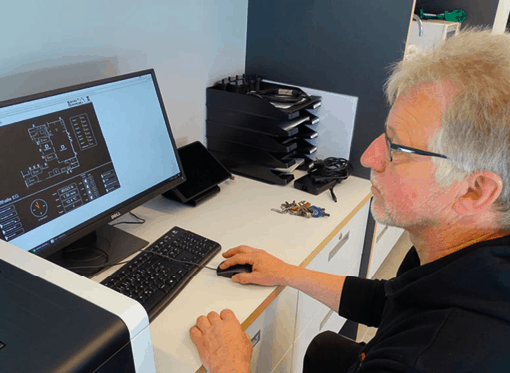 Clever building management pays off: The city of Ahaus networks lighting, heating and air conditioning in its buildings. KNX and EIBPORT are used here. This has had a positive effect on energy consumption in particular.

Modern building management and resource-saving actions are not only reserved for large companies: Thanks to modern technology, it can also be sensibly retrofitted in existing buildings. This is demonstrated by the municipal administration in the Westphalian town of Ahaus. The medium-sized town with 39,630 inhabitants near the border to the Netherlands is exemplary in this respect. As the home of a well-known German technology company, Ahaus is perhaps closer to the technical possibilities and the sensible use of information technologies and telecommunications than many a large city.

It is not at all surprising that Stefan Hilgemann, technical staff member of the Real Estate Management Department – Building Construction Division TGA of the City of Ahaus – presents the building renovation of the Kulturquadrat with music school and town hall and a primary school with a certain amount of pride. Step by step, whenever a refurbishment was due, the conventional building technology was replaced with contemporary smart technology and individual technology islands were networked with the overall system.

“KNX NETWORKED” PAYS OFF FOR THE CITY OF AHAUS

The system of choice is the world standard KNX. Stefan Hilgemann would like to network even more, for example to integrate all heating systems into the comprehensive control system. That pays off in the short term, but unfortunately some manufacturers refuse to integrate, citing warranty issues. And unfortunately not every manufacturer of boilers offers the necessary KNX interface (yet). Specialised island systems do not necessarily have to deliver better results, as comparative measurements prove.

“After the warranty has expired, we are gradually integrating all systems into our overall control system. This gives us a meaningful before-and-after comparison of the consumption values. In the future, we will only use products from manufacturers that can be integrated into our overall solution,” Stephan Hilgemann sums it up.

The success of the integration into the KNX system pays off for the city of Ahaus in euros and cents. School rooms and concert halls are used in time slots and therefore need to be managed intelligently.

Mere individual room temperature control is not effective because the time component is missing. Ahaus relies on the “EIBPORT” and the “FACILITYMASTER” from the manufacturer BAB Technologie in combination with the “CONTROL R” room occupancy plan software. The comprehensive and tried-and-tested software allows the overall installation of the buildings to be clearly visualised, as well as easily and safely controlled. Thanks to IP networking, this can also be done by smartphone via the Internet with VPN SSL or the manufacturer’s own BAB SECURELINK.

The so-called cultural square combines old and new buildings, music school, adult education centre and town hall. In other words, buildings with very different structures and uses. The buildings can also be air-conditioned in a conventional way. However, this is not energy-efficient because systems that are independent of each other often work against each other rather than with each other. As a user, you have little or no influence. This is different in Ahaus. The intelligently networked systems can be operated optimally for the indoor climate and costs in every situation.

For a music school, special rules apply. Besides practice rooms with climate-sensitive instruments, there are halls with audiences and stage technology. Stage lights are usually operated by DMX, the hall lighting by KNX. Communication between DMX and KNX was realised via the “DUODMX GATEWAY” from Bab-Technologie. Here, too, integration took place for the operator. All lighting is controlled via a screen: with the help of the “DUODMX GATEWAY” and a touch panel PC, the lighting is controlled via a central visualisation. The user does not need to know which luminaire is operated via which bus.

Musical instruments are values. The music school as well as other buildings in the Kulturquadrat use the building sensors to detect burglary. Motion detectors, which are actually intended for lighting, heating and ventilation, signal possible break-ins when the building is locked. In doing so, the building signals to the intruder that it has been detected. The police are informed via a reporting chain. Although the KNX-based burglar alarm system is not a standard-compliant alarm system, it has already proven itself in practice.

The Pestalozzi School is a primary school and within walking distance of the Kulturquadrat. It is generally known that the CO2 content of the air we breathe affects the concentration of teachers and pupils. The harmful effect of the gas is primarily the displacement of oxygen. Since CO2 is heavier than air, a harmful effect occurs particularly close to the ground. Sitting students are therefore more likely to be affected than standing teachers.

A concentration of 1.5 per cent increases the human respiratory volume by at least 40 per cent. Even at five percent of a concentration of CO2, humans react with dizziness and headaches. At the Pestalozzischule in Ahaus, the CO2 content in the classrooms is measured and, if necessary, a retrofitted ventilation system is switched on in the window frames. This is how modern technology supports pupils and teachers.

BENEFIT FROM AUTOMATION IN EVERY REFIRMATION

When buildings are newly designed and constructed, building automation is easy to implement. It is more difficult when it comes to existing buildings. Here, Ahaus consistently follows the path of relying on automation for every renovation and introducing the “Ahaus building standard”, KNX and EIBPORT. Basically, the same hardware and the same software are used everywhere with the aim that observation and operation look the same everywhere and can thus be operated easily and without additional training.

This reduces the workload for the caretakers and virtually eliminates operating errors, even by strangers. The overview screen provides all relevant information at a glance. Since the main switches and setpoints are displayed here, it is very easy to operate a building complex economically in this way, thus protecting the city budget and the environment. The energy report presented by Stefan Hilgemann shows impressive figures.

The most obvious successes can be seen in the climate-adjusted heating energy consumption. In the years from 2005 to 31 December 2016, it fell from 10.4 million kilowatt hours to 8.8 million kilowatt hours. This corresponds to a total saving since 2005 of 21.1 million kilowatt hours of fossil fuels and 1.2 million euros. The actual savings would be even higher, as new heated areas are constantly being added. Preventive measures were taken in Ahaus to counteract the cost spiral through intelligent control.